World Flags Give Global Welcome to All Who Visit Rec Center

Visitors to the Student Recreation Center will notice something different as they cross the main hallway to the fitness center – a display of flags from around the world, 167 to be exact. 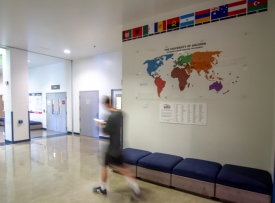 The flag decals represent the countries of the students who have attended the University of Arizona, dating back to 2000. The flags aren't labeled, but appear in alphabetical order by country name. Visitors can easily find their home countries or simply take a shot at guessing which country is represented by each flag.

The idea came from Troy Vaughn, who started as director of Campus Recreation in July. In his first weeks at the UA, he noticed a group touring the Recreation Center. Some members of the group mentioned they were seeking a welcoming environment for international students.

"I was immediately struck by this," he said. "Shortly thereafter, the ideas for a welcome sign in different languages as well as the flag project developed. It was just the right thing to do."

Visitors can find the welcome signs, each featuring 15 languages, at every entry to the Recreation Center – a precursor to the larger flags exhibit that now contours the main hallway. 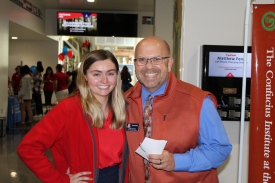 For the flags project, Vaughn enlisted the help of the Campus Recreation marketing team, including marketing assistant Grace Faerber, a junior at the UA.

"As a global studies and East Asian studies double major, I jumped on the opportunity to take a leading role with the Rec's international flags project and showcase the rich diversity and unity on our campus," she said. "I hope when others see the display, they too develop a greater awareness of and appreciation for our UA and global communities."

In addition to the flags in the Rec Center hallway, visitors will see a world map that also i 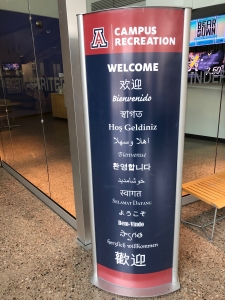 ndicates students' countries of origin. Each country on the map has a number that corresponds with one of the flags lining the hallway.

This is the first phase of the project, which is titled Celebrating Our Diversity. In the coming months, Campus Recreation plans to add a map of Arizona that shows Native American nations.

The team will update the display as needed, for example, when an official flag or national name changes or when the UA welcomes students from an additional country.

For now, Vaughn hopes the display tells a clear message that everyone is welcome and supported at the Rec Center.

"The smiles on the faces of students who came out for the opening ceremony, knowing that Arizona Global and Campus Rec have made a commitment to them, are immeasurable," he said. "It's our job to make students feel comfortable and welcome, and with this project, I feel we have gone a long way in doing just that."