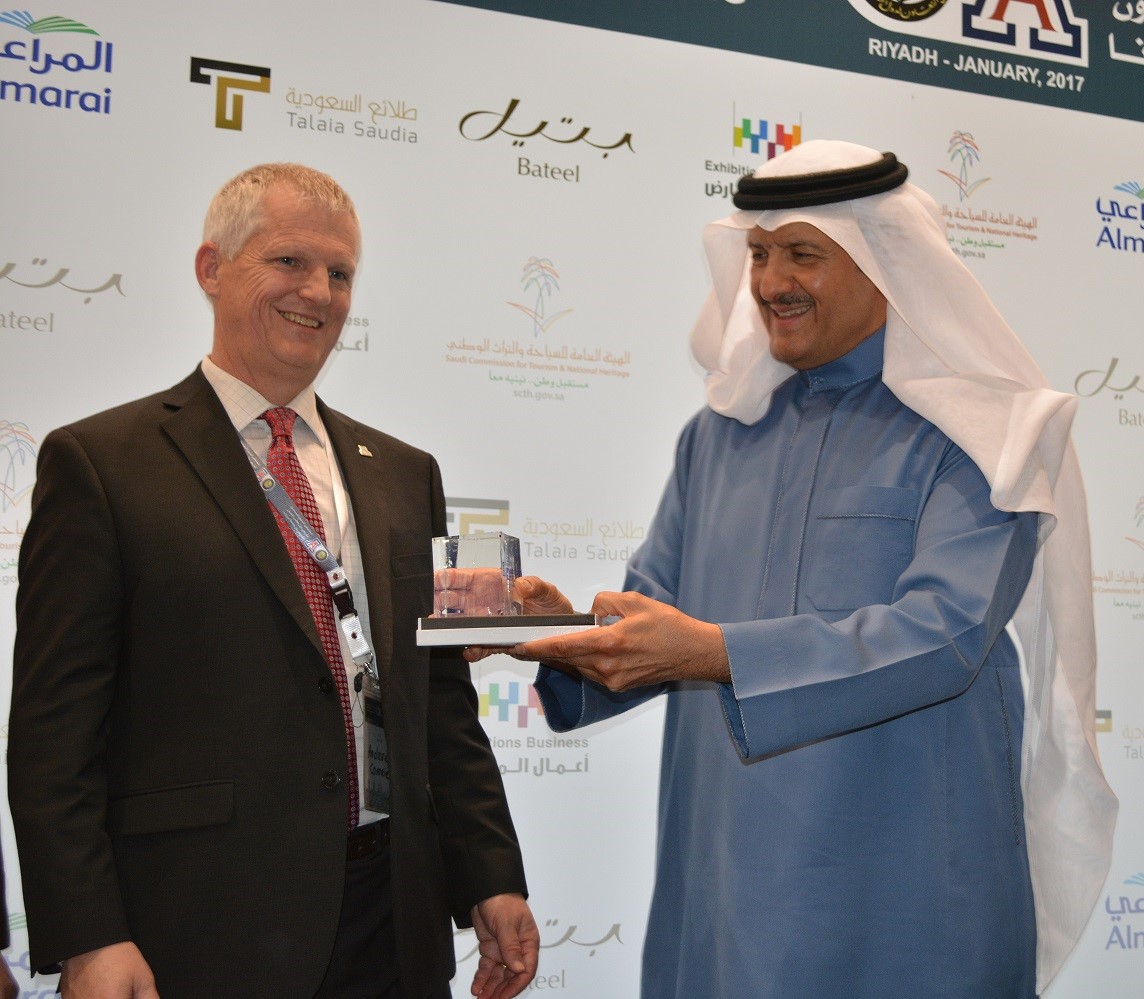 Affirming their deep connection to the University of Arizona (UA), UA Gulf Cooperation Council (UA GCC) members joined in Riyadh, Kingdom of Saudi Arabia for their seventh annual reunion from January 26th through the 28th, 2017. 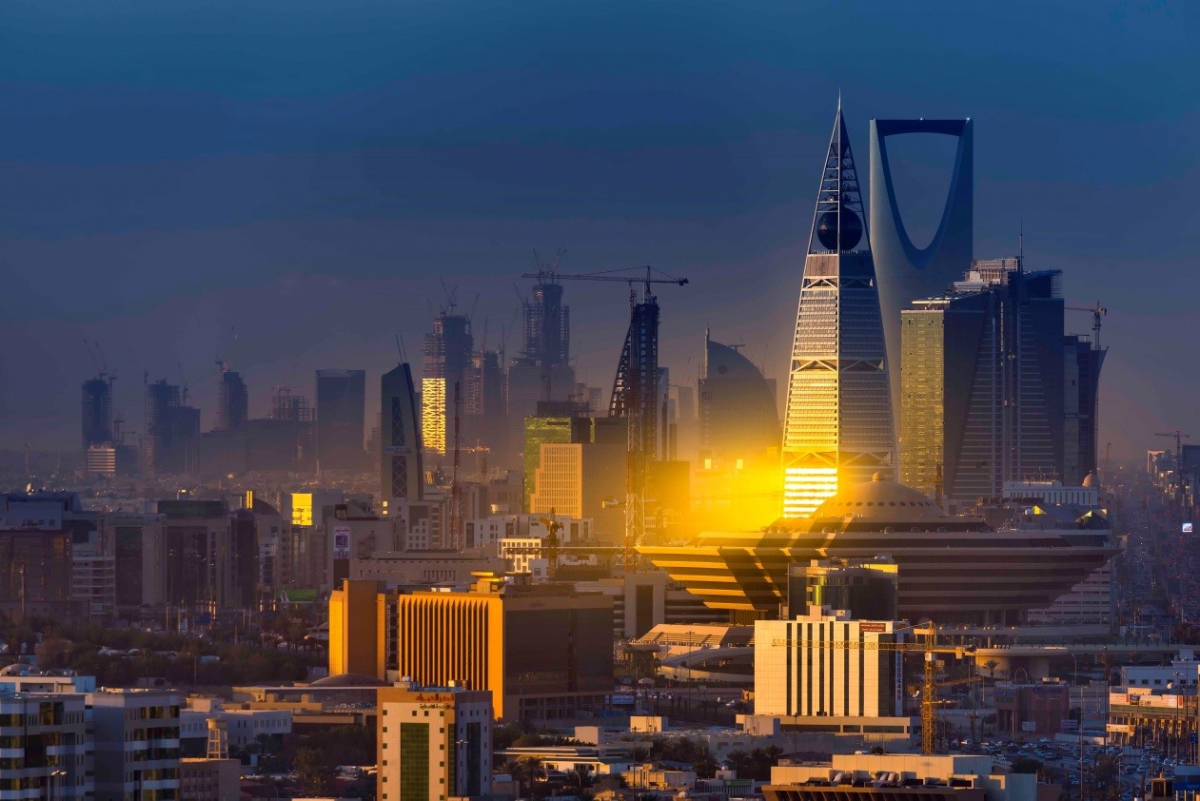 The event featured a reunion gala and three days of activities highlighting the history and culture of the Kingdom of Saudi Arabia, as well as development initiatives throughout the capital city of Riyadh and surrounding areas. 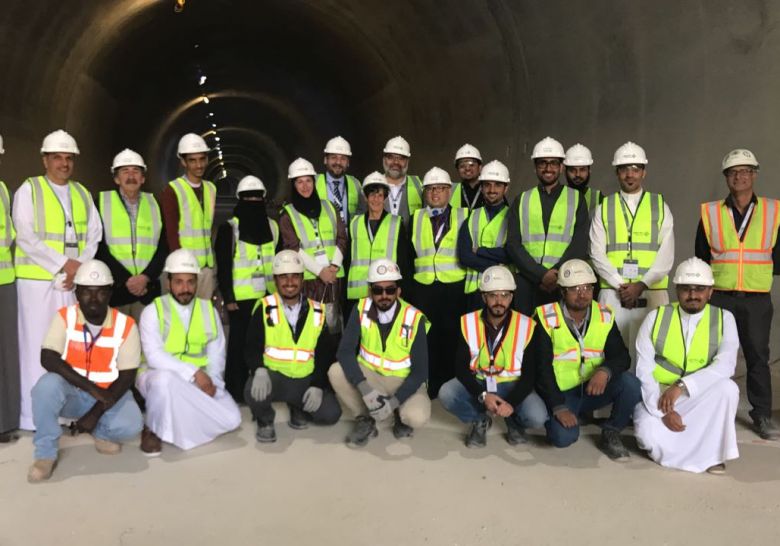 His Royal Highness Prince Sultan bin Salman, President & Chairman of the Board of the Saudi Commission for Tourism and National Heritage, helped facilitate several events, including a visit to the King Abdulaziz Historical Center, which houses the National Museum of Riyadh and serves as a hub of culture and history in the Arabian Peninsula. His Royal Highness, who attended the UA for a year through the Center for English as a Second Language (CESL), also hosted a gala for attendees, highlighting advancements in tourism to the Kingdom— a key focus of national strategic efforts.

UA dignitaries, including Senior Vice President for Academic Affairs and Provost Andrew C. Comrie, attended the gala, giving thanks to the alumni group and conveying future plans for the UA in the region.

“Our intention, aside from enjoying these reunions and honoring achievements, is to begin to lay the groundwork for a multi-year strategy to become the GCC’s most valued and most trusted educational partner for generations to come,” said Comrie, who traveled to Riyadh for the reunion alongside Hassan Hijazi, UA Director of Middle East Relations; Mike Proctor, Vice President for Global Initiatives; Joanne Lagasse-Long, Director of International Student Services; among other UA faculty and staff.

The reunion contained carefully planned historical, cultural, and business activities, including a visit to Tuwaiq Palace sponsored by the Arriyadh Development Authority (ADA). The agency is tasked with implementing the mission of the High Commission for the Development of Arriyadh, which is responsible for the advancement of Riyadh. The ADA also facilitated a behind-the-scenes tour for alumni of the Riyadh Metro Rail Project, a sweeping program that will create six metro lines that connect the capital city. 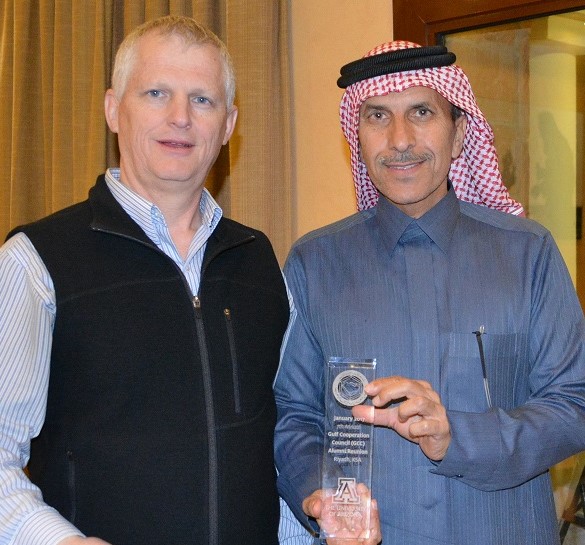 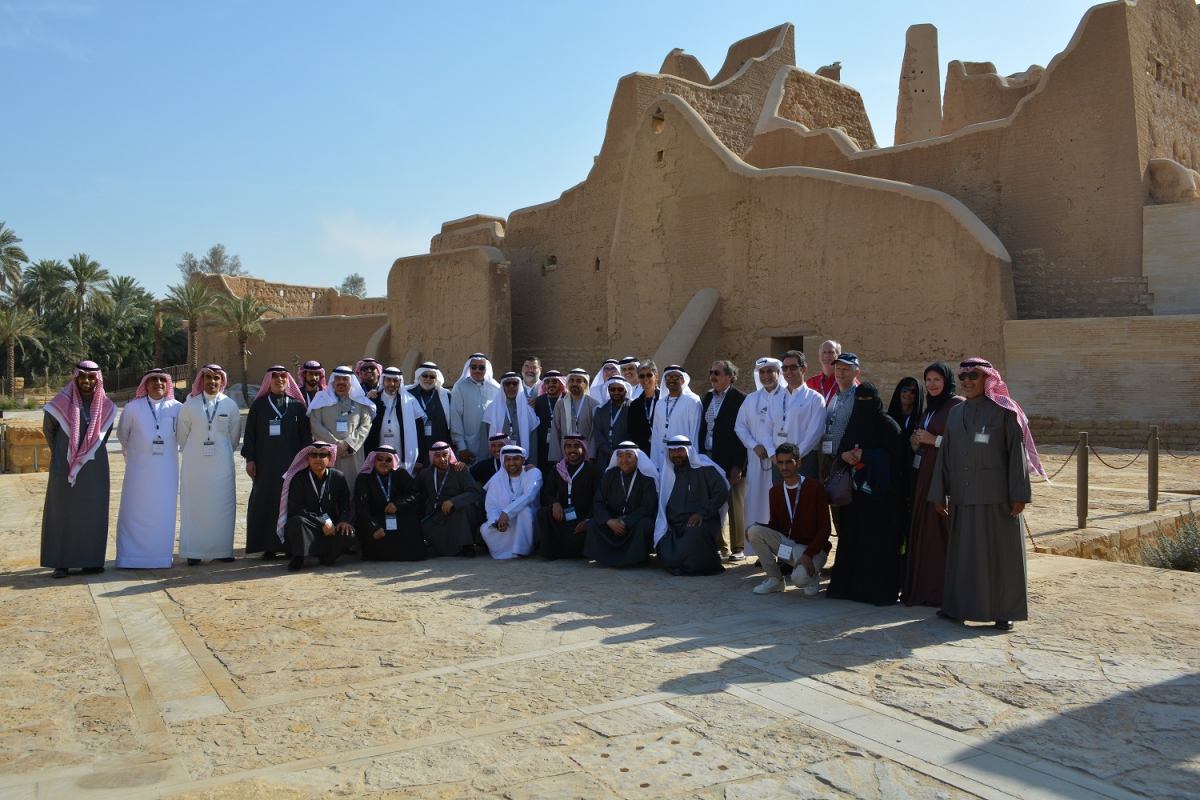 Sponsored by the Saudi Commission for Tourism and National Heritage and the ADA, the participants also got an exclusive look at the Historical Dirriyyah Development Program, an initiative to rehabilitate Historical Dirriyyah to its natural, historical, and cultural characteristics. The original home to the Saudi Royal Family, Dirriyyah sits on the northwestern outskirts of Riyadh and serves as a platform for cultural activities and a face of national identity for the kingdom.

Alumni also visited Al-Ghat, a small town northwest of Riyadh that showcases archaeological and historic scenery.  The activities included trips to Alrahmania Cultural Center, a branch of the Abdulrahman Al-Sudairy Cultural Foundation, hosted by Dr. Ziad Al Sudairy, followed by a visit to the restored old town of Al-Ghat and the Al-Ghat Museum.  After that, the group visited a number of date farms which are part of the supply chain to the world-renowned gourmet food brand, Bateel.

Attendees also toured the grounds of Almarai, the largest integrated dairy company in the world, getting an up-close look at operations of the of the L’usine Bakery plant and the company’s dairy processing plant.

Showcasing the culture of the Kingdom, UA alumnus and an organizer of the reunion, Dr. Salman Al Sudairy, also hosted an event where attendees relaxed in a traditional Bedouin tent as they sipped coffee and tea while watching and 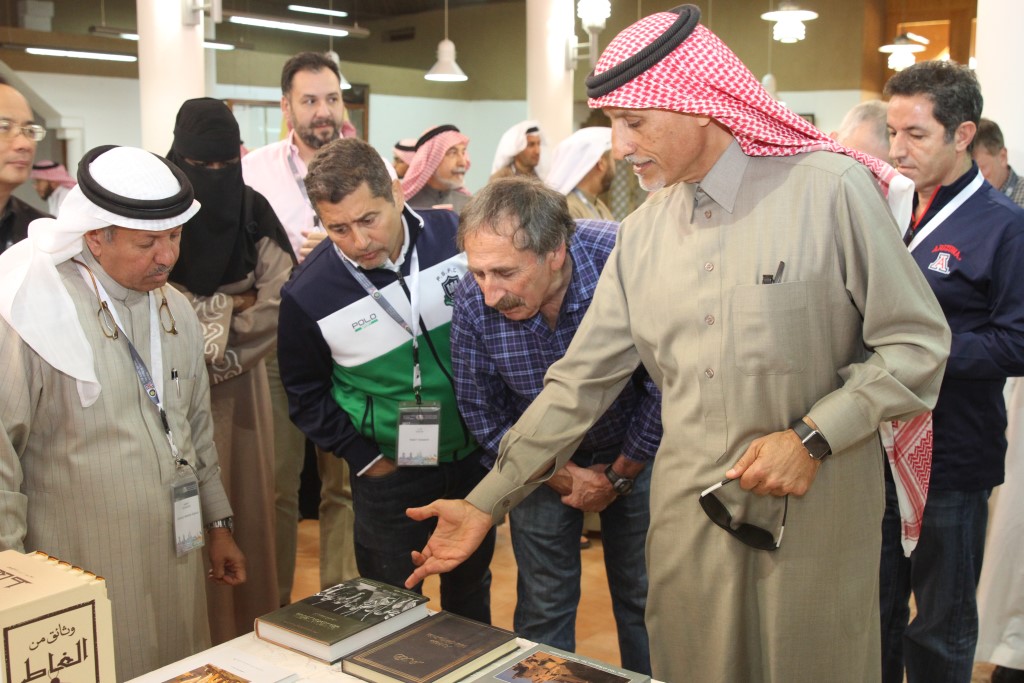 participating in a folkloric program and dinner.

“We hope this reunion continued its projected role as a platform that unites and a mechanism that extends the University’s value to us and to those we care about,” said Al Sudairy, an entrepreneur and co-founder of Tejoury, a record management company. He added that the organizing committee, also comprised of Dr. Nasser Aljaeidi, Dr. Abdulaziz Aljawini, Dr. Ali Musallam, and Dr. Turki Al Rasheed, tried to provide something new and exciting for all attendees, even those who live and work in Riyadh.

“The affinity this group has for the UA is truly unique. They have a deep connection to their college experience and have become wonderful advocates for the UA in the Gulf Region,” said Hijazi. “Throughout the years, the UA GCC has grown tremendously, and alumni continue to unite to advance higher education and philanthropic opportunities on behalf of the UA.”

The UA GCC formed seven years ago when four UA alumni from the United Arab Emirates (UAE) joined together to reminisce about their college years in Tucson, not realizing this gathering would grow into something much larger. The alumni, His Excellency Mohammed Sharaf, Mr. Ahmed Anoohi, Mr. Sami Al Hashemi, and Mr. Abdulaziz Malik, merely intended to rekindle social connections, but word of their inaugural reunion multiplied throughout the Gulf Region, marking the inception of the UA GCC. 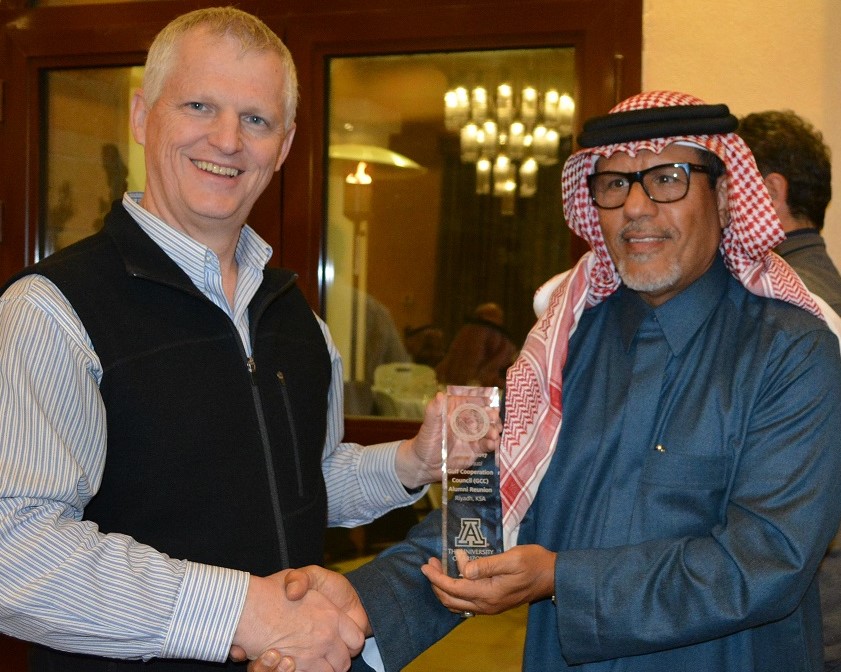 One-hundred-and ten alumni attended the first UA GCC reunion in Dubai in 2010, but with steady growth over the years, the latest reunion in Riyadh attracted more than 200 people who had a positive experience at the UA.

Provost Comrie recognized that UA GCC members actively engage their governments and universities about UA initiatives, helping to establish a footprint of substantial partnerships in the Gulf Region. “These past years, GCC alumni have welcomed our UA teams, linking the UA to GCC countries and officials in such a unique and passionate way, allowing us to accomplish many great things in this region,” said Comrie.

With the assistance of UA GCC members, Hijazi has started negotiations with several universities in the Gulf Region to establish UA microcampuses, where students take courses co-taught by UA professors and their partners to earn a UA degree alongside one from their home institution.

Further defining this model, UA alumnus Dr. Turki Faisal Al Rasheed, another organizer of the reunion, formed a collaborative effort between the UA and three Saudi universities focused on improving the training and welfare of rural farmers as a means to protect Saudi food security. He noted that agriculture is one of the best tools to enhance security, alleviate poverty, and promote economic growth. He also highlighted the diversified experience of UA GCC members.

“The annual reunion boosts camaraderie with GCC graduates in the region and keeps the relationship ongoing with the UA,” said Al Rasheed, also an adjunct professor of Biosystems Engineering at the UA and Chairman of Golden Grass Inc. “One of the aims of the event was to foster connections with graduates who are successful in their own fields of expertise to help bridge between the GCC and the UA and American Society as a whole.” 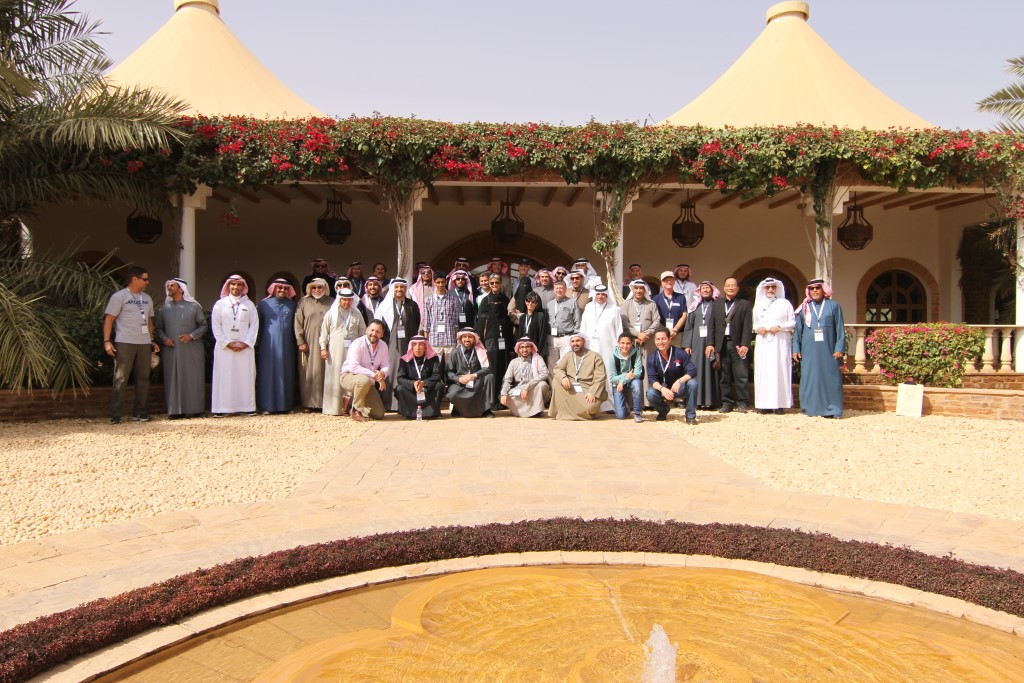 “These partnerships are just the tip of the iceberg,” said Hijazi. “Historically, the UA has had one of the most substantial partnerships in the Gulf Region due to the similar climate and the excellence of our programs, but because of the affinity and advocacy of our alums, the UA will have an even greater association with the region in the future.”

All GCC students who attended the UA are welcome to join the UA GCC. The age profile ranges from recent graduates to retirees, all of whom share a positive learning experience and appreciation of the UA. The 2018 UA GCC reunion will take place in Abu Dhabi, United Arab Emirates.