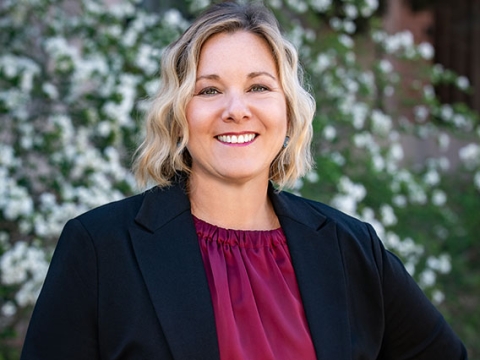 Lisa Turker is the University of Arizona Special Advisor of Global Education, overseeing the management and student support services for UA microcampus dual degree programs, Global Direct online pathway programs, and non-credit programs offered abroad. These programs currently serve over 2000 students, a number that is projected to triple over the next five years.

Prior to this, Turker served in leadership roles at UA Study Abroad first as the Associate Director of UA Study Abroad and then as Director of Arizona Abroad Locations. As Director of Arizona Abroad Locations, Turker established and managed a network of dedicated study abroad sites in collaboration with partner institutions. As Associate Director, she managed the day-to-day operations of the office, focused on student engagement, and led curriculum integration efforts.

Before joining the University of Arizona, Turker lived abroad for seven years in Kazakhstan and Turkey. After completing her Master’s in Political Science in 2007, she moved to Almaty, Kazakhstan, where she worked at KIMEP University teaching graduate-level academic reading, writing, and speaking classes, and managing the English program for graduate students (Law, MBA, Social Sciences) including advising, student support, curriculum development, and program evaluation.

While in Almaty, Turker worked for the U.S. Mission to Almaty on projects with USAID/CAR and for the Eurasia Foundation of Central Asia on projects funded by the European Union, U.S. government, and various foreign ministries.

In 2010, Turker became a lecturer and international advisor at Istanbul Arel University in Turkey, where she designed curriculum and monitored and evaluated English language learning programs, managed study abroad programs, and assisted with the implementation of the Bologna Process requirements which aimed to reform higher education in Turkey in line with the European Higher Education Area standards, an EU initiative. She has traveled to over 20 countries throughout Europe, Central Asia, Eastern Europe, and the Middle East.

With the University of Arizona since 2016, Turker has made an impact in programming for Study Abroad and Student Engagement and the Arizona Abroad experience. As Special Advisor for Global Education, she continues to create and implement programs that make higher education accessible and attainable to students around the globe, who become part of the growing Global Wildcat family.