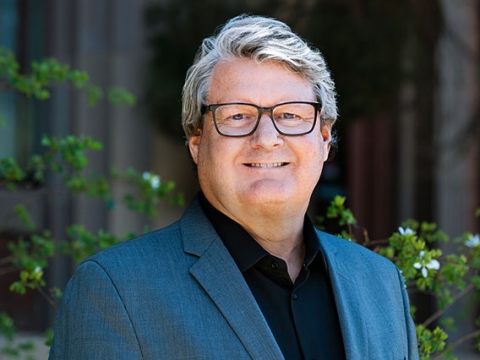 John Paul “JP” Jones III (Ph.D. Ohio State University) is Dean of International Education at the University of Arizona. He is also Professor in the School of Geography, Development, and Environment in the university’s College of Social and Behavioral Sciences.

Jones was appointed Dean of Arizona International’s division of International Education in January 2022. In that time, he has worked to deepen the university’s strategic partnerships by further developing its pioneering “microcampus” – or dual degree – programs, in which UArizona faculty assist faculty at select international partner institutions to provide collaboratively-delivered, affordable UArizona degrees that complement and enrich the curricular opportunities for students across many world regions.

Before joining Arizona International, Jones served for over a dozen years as the Don Bennett Moon Dean for the College of Social and Behavioral Sciences (SBS). In addition to championing several dual degree programs from SBS in collaboration with Arizona International’s strategic partners, he was responsible for leading twenty SBS academic units and fifteen centers and institutes focused on research and community outreach. Branded as the university’s “People College,” Jones helped support new undergraduate and graduate programs in: American Indian Studies; Arabic; Care, Health and Society; Criminal Justice Studies; Data Science; Development Practice; Environmental Studies; Food Studies; Game Design and Development; Geographical Information Systems Technology; Human Rights Practice; Information Science; Law; Persian and Iranian Studies; and Public Policy. Under his leadership the college grew by nearly one-third, aided in part by the additions of the Department of American Indian Studies and the Department of English, as well as the establishment of the SBS School of Information, or iSchool, and the Department of Political Economy and Moral Science.

Jones is a human geographer with a long interest in social theory, geographic methodology, and the history of geographic thought. The central question he has addressed throughout his academic career could be posed as, “What role do the components of geographic space – that is, distance, place, region, connectivity, environment, and scale – play in social explanation?” His premise is that, in understanding these dimensions of social space, all social sciences are enriched, and better equipped to answer their important questions. Early in his career he pioneered methods for the spatial contextualization of regression models. His mid-career work was informed by developments in poststructuralist theory. That research examined the crisis of representation and the social construction of identity in the context of new developments in spatial ontology and epistemology. Over the past fifteen years he has contributed to debates over the role of spatial scale in geography and the other social sciences. His research has been grounded in diverse empirical projects, including several NSF-funded collaborative research awards on: the feminization of poverty in the United States; the globalization of the civil society sector in Oaxaca, Mexico; the socio-political foundations of mosquito management in Arizona; and the co-productions of scientists and artists in areas of climate change, geovisualization, and bioart.

Jones has authored over 100 articles and book chapters (Google Scholar page here; CV and access to most publications here). In 2015, he received the Lifetime Achievement Award from his professional organization, the American Association of Geographers. He is the past editor and associate editor of his discipline’s flagship journal, the Annals of the American Association of Geographers. He served as founding co-editor of the Sage journal, Dialogues in Human Geography, and, for Wiley-Blackwell, he edits the textbook series, “Critical Introductions to Geography.” Jones was a Fulbright Professor at University College Dublin and has held visiting appointments at the University of Nijmegen in the Netherlands, the Universitat de Girona in Spain, and the London School of Economics.