July 10, 2019
By Caleb Simmons, Department of Religious Studies and Classics

From the time we are children we hear stories about kings. They are subjects of fairy tales and popular animated films. As we grow older, many of these stories blossom with new, intriguing details that have captured the imagination of historians and litterateurs alike.

Historical kings, like Charlemagne or Louis XIV, and legendary kings, like King Arthur of Camelot or Beowulf, are united in our collective imagination through captivating tales of heroism and opulence. While kings and kingship serve as fodder for fantasy, we often overlook the ways that kings and their stories are connected to religion. Charlemagne was crowned emperor of the Roman Empire by Pope Leo III and later the Holy Roman Empire would trace its legacy to the great king. Louis XIV fostered his identity as the Sun King who, like Apoll 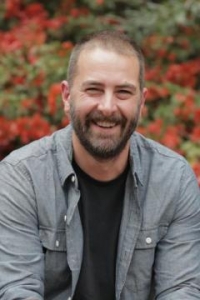 o, gave light to his people. King Arthur pulled the sword from the stone as Merlin had prophesied and/or is given Excalibur by the goddess-like Lady of the Lake. Beowulf's great victories are said to be part of God's divine plan.

My research on religion and history in India is motivated by similar narratives – stories about kings that often involve metaphysical, magical and divine intervention. Many narratives from Indian history are similar in form and function as those mentioned above. Indeed, in my research I've come across numerous stories about magical swords, religious professionals authorizing a new king, and kings equating themselves and their lineage with gods, some of which can be read about in my book "Devotional Sovereignty: Kingship and Religion in Colonial India," forthcoming from Oxford University Press in December.

Now, however, I would like to share examples from two sites that I visited on my most recent trip to India in December: the Udayagiri Caves and the Great Stupa of Sanchi. These caves give us early examples of the intimate relationship between kings and religion, as well as glimpses into kingly stories from ancient India.

Traveling to these sites is a remarkable journey, both in terms of geographical and temporal distance. From Tucson, one must go through several stops (mine were San Francisco and New Delhi) before arriving at the small regional airport in Bhopal, India. While many people are familiar with Bhopal from the Union Carbide plant tragedy of 1984, the region surrounding the industrial city is home to a wealth of historical sites.

After a one-and-a-half-hour taxi ride bringing the total travel time to more than 40 hours, I arrived in Sanchi, a small village primarily aimed at tourists coming to see the Great Stupa and the Udayagiri Caves, which are only about 5 miles away, both sites managed by the Archaeological Survey of India. The sites themselves are interesting and a bit disorienting as the manifestations of modern tourism – gates, turnstiles, souvenir shops and neatly manicured lawns frame the Great Stupa and the caves.

The Udayagiri is home to 20 caves that were once home to religious rituals and mendicants – those who have taken vows of poverty to devote their lives to religion – and today feature stunning religious imagery and inscriptions from the Hindu and Jain traditions that date back to the fifth century.

The cave complex is a large site that covers a sprawling hill that is frequented by Indian and international tourists. While the caves were important religious sites and are now a place for sightseeing, they were also important for the Gupta kings who ruled the region during this period and whose stories are now written in stone.

In cave No. 15, there is a relief sculpture that depicts the cosmic deity Vishnu asleep on his serpent. Below the deity is a row of figures including Chandragupta II – who reigned as king from 375-417 and commissioned the image – in humble supplication, worshipping the cosmic deity at rest.

As you move around the rocky hill formation, a larger cave, cave No. 5, stands with a massive relief of Varaha, the boar avatar – or descent – of Vis 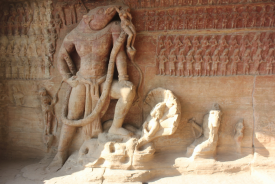 hnu awakened to defeat demonic forces and save the Earth goddess, who dangles safely from his tusk. At the deity's feet, once again we find Chandragupta II in devotion to Vishnu's avatar.

While the reliefs are clearly seeking to portray the king as devout, there is subtle and sophisticated evidence found in literary sources from the period that suggest that Chandragupta II was not just the devotee in the image but was equated with the awakened manifestation of the deity Vishnu – the king was both devoted to the divine and divine himself.

The Great Stupa of Sanchi

The Great Stupa of Sanchi is another remarkable site of religious devotion, as well as one of the oldest in India. This stupa, or reliquary, is said to house the remains of Gautama Buddha – or, more simply, the Buddha – and was originally commissioned by the great emperor Ashoka of the Mauryan Empire, who ruled over the entire Indian subcontinent in the second century B.C. and who is lauded as a great Buddhist.

The Great Stupa, a round dome structure, is most well-known for its architecture and art, especially its beautifully ornamented gates that were added after its original construction.

What was of particular interest to me, however, was the stupa's history as a site of royal patronage and the variety of rulers who commissioned the various stages of expansion. Indeed, for almost a millennium, rulers – Buddhist and Hindu – funded various expansion projects both for the good merit associated with religious donations but also to connect themselves to Ashoka, one of the greatest rulers in Indian history, through mimesis of his religious patronage and devotion.

Where Chandragupta II had equated himself with the deity Vishnu, those that commissioned the expansion of the stupa sought to connect themselves with the saintly king Ashoka and his religious deeds.

This story orginally appeared on UA@Work.